I’ve always wanted to be a lawyer, I was 17 years old, when I stepped foot into Clifford Chance, this towering skyscraper and the firm where I later trained at qualified at. I’ve always seen being a lawyer as my identity. Suddenly cycling came around and I was just like ‘hold on a second, I’m more than a lawyer’. Now I’ve got something else that gives me a sense of purpose, identity and community. I’ve found such good friends through cycling, being a cyclist has become the new defining feature of my identity and I want to share that with everyone. 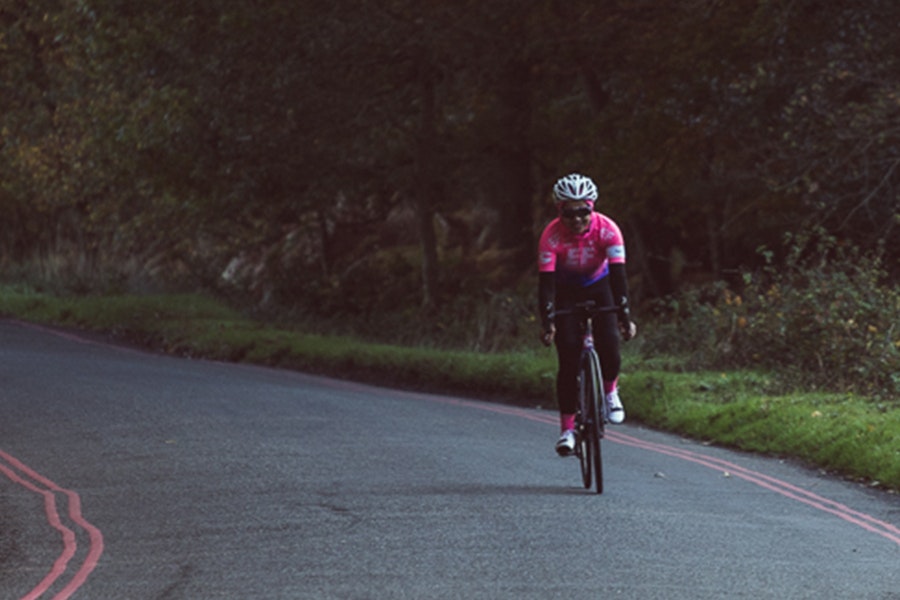 RIDING THROUGH THE PANDEMIC

In the backdrop of a global pandemic, lots of new cyclists are joining the road for their daily exercise, a safer way to commute or to explore the outdoors with their families. There has also been a surge in the number of those training indoors on platforms like Zwift. Cycling Weekly reports a 977% increase in turbo sales as cyclists respond to Covid19.

For me, the bike is a safe place, my sanctuary. During the peak of lockdown I cycled over 225 miles in a week, which included rides to Box hill (80 miles) and Cambridge (90 miles). Photos to illustrate how beautiful it was, and although the Cambridge Central Mosque (Europe’s first purpose-built Eco Mosque – it has solar panels and environmentally friendly ethos) was closed, when I’d explained that I had cycled 62 miles to get there, I was allowed to pop in and be the only person in the prayer area as a result of Coronavirus.

HOW I GOT INTO CYCLING

I first learned to ride a bike aged 20 in Victoria Park, with such magical memories of falling over on a hybrid. I had no idea I would be falling over again when almost a decade later I made the transition to cleats, lycra and a road bike! I tried road cycling whilst on holiday in Dubai in April 2018, on the Al-Qudra track (a training ground for cyclists including the pros, like Geraint Thomas and Caleb Ewan!). I rented a road bike for the first time, did about 60km with no padded shorts (regretted later!). There I fell in love.

When I returned to London, I was connected with a charity which offered entry level road bikes to borrow. So, I borrowed a bike and bought most of my kit and accessories through the Cycle-2-Work-Scheme. I did my first big ride London2Brighton, and then also managed to crash downhill and break my arm a month later! After recovering, I went back to Dubai to the Al-Qudra track to regain my confidence. In February 2019, I bought my first road bike and officially joined my local club Hub Velo. I later joined Rapha CC and Velociposse, a women’s only club and my adventures have been incredible, having cycled in the Peak District and Yorkshire. During the period of a mental health breakdown, losing my dad, cycling got me through my grief, I was even riding at 6am to Epping on the day of his funeral. 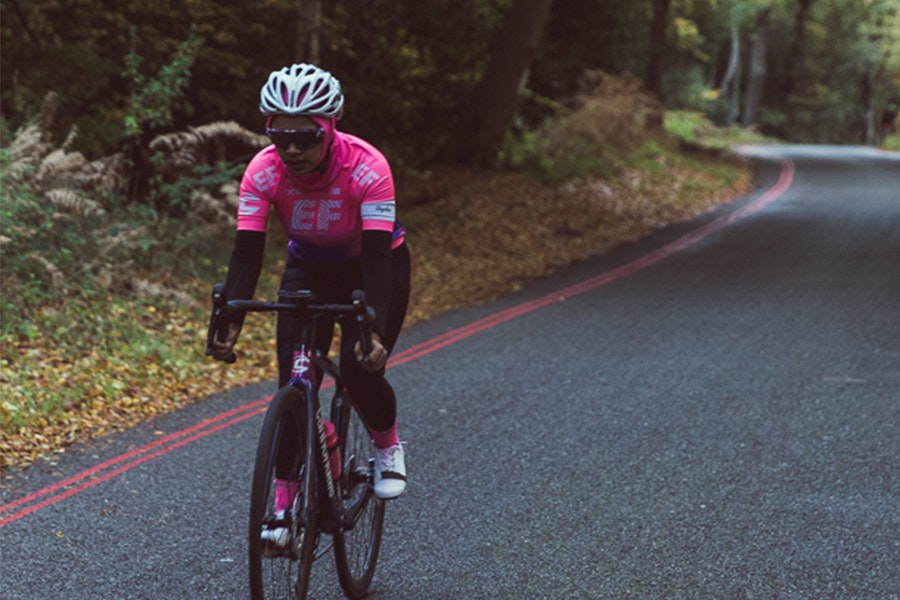 WHAT CYCLING MEANS TO ME

My bike is my best friend, in a lonely world, where it can be difficult to talk, even for a massive extrovert like me, it certainly helps me process my thoughts and feel grounded again. I used to travel abroad a lot and use flights to run away and now seeing the English countryside is my great escape. I have also made lots of friends along the way, my riding companions who understand my love for the bike and passion for #choosingcycling. It’s also a great conversation starter with senior colleagues, cycling seems to be the new golf with many!

Being a Muslim woman in hijab & lycra, comes with its cultural and religious challenges, both with my family and the wider community. I grew up with 6 sisters who all chose marriage and motherhood, me choosing to be a lawyer and going to university was already trailblazing, I then threw cycling into the mix! However, the inclusivity of the cycling community has been mind-blowing and I’ve even had Sir Bradley Wiggins encourage and follow me on Instagram!
WORKING WITH CYCLING BRANDS As my social life during lockdown became limited, I needed the interaction with others so I was always out riding, which was my way of coping during months of working from home. I got approached on Instagram to work with Rapha, a global cycling apparel brand, to work on their #choosecycling campaign. I was involved in a collage of other cyclists who used cycling during the pandemic to find strength and meaning in a dark and lonely world.

I was then asked by Rapha to be an ambassador for the Women’s 100 campaign, a ride which unites women across the globe and encourages them to ride 100km on the same day. Modelling for this and being a part of the ‘invisible peloton’ a concept founded by ultra-cyclist Emily Chappell was phenomenal. The day the campaign launched, 14th July, I felt my whole life had changed. Rapha had made a custom hijab for me to match my jersey (see links below) and suddenly cyclists across the globe, including the pros, knew who I was. I was able to leverage this opportunity to showcase to my community of young Bangladeshi Muslim women, discouraged to partake in sport, that if I can take up road cycling in my late twenties, that really anyone can!

As my profile was raised, I’ve had the privilege to engage with many prestigious cycling brands, and am a proud ambassador of Cannondale bikes. They champion and support my riding by allowing me to ride a shiny new Supersix Evo road bike, making me feel like a pro, whilst showcasing the everyday rider. I feel empowered to inspire others to cycle and share the love I have for the bike. I am also partnering with brands like Oakley, to empower underprivileged communities like my own, and want to connect athletes with young girls who may aspire to be the next Hannah Barnes. The downside of all this is quite often feeling like I have a second job, in the last few months that I’ve been in the spotlight!

I think the highlight for me was seeing my face on a billboard in Canary Wharf, a place special to me, starting my early years as a lawyer there. My face up on a Rapha billboard in the Reuter’s Plaza meant more than just cycling, it brought about all the nostalgia of some of the best years of my life. To have so many people send me pics of seeing me ‘the model’ is surreal. A Muslim female cyclist in hijab, breaking all social and cultural norms is huge, and for my face to be in Rapha stores all over the globe means we are defying everything society says cycling should be.

GIVING BACK TO THE COMMUNITY

I have started leading women’s rides and am also the Women’s Champion of my local club, Hub Velo. I’m happy to teach women how to ride, but you would need your own bike. I’ve even appeared on a Bangladeshi TV channel, showcasing my story, to encourage women from my background to take up cycling in spite of the cultural baggage. I never chose to be a role model but I am adamant to make cycling more than exercise and sport, it’s a movement!

I know road cycling can be intimidating for many women, and I’d love to support anyone who would like some advice on how to get started, or ride with those that feel alone. Cycling is one of the greatest gifts God has given me and I am so passionate about sharing this happiness on a bike with others. I hope reading this will give you the courage to go out and ride. 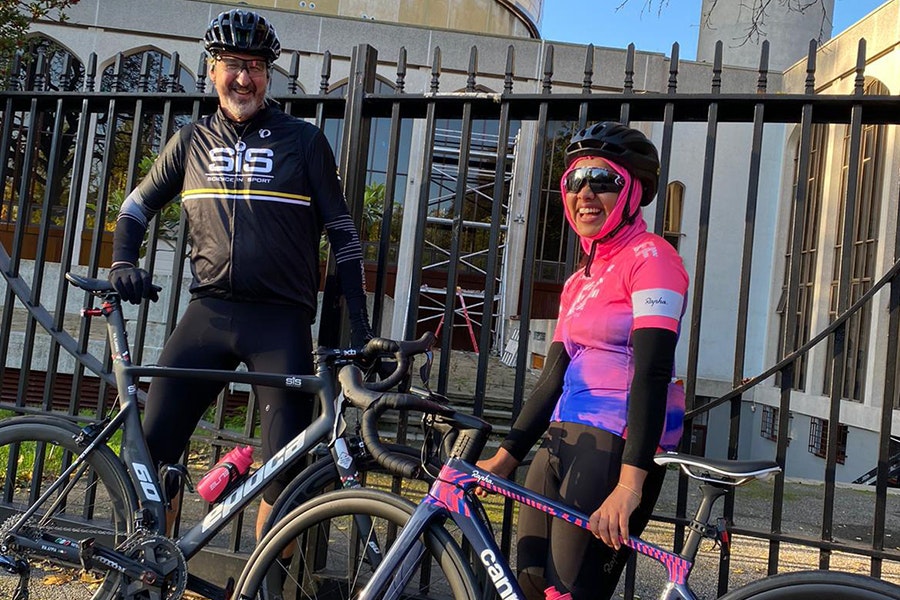